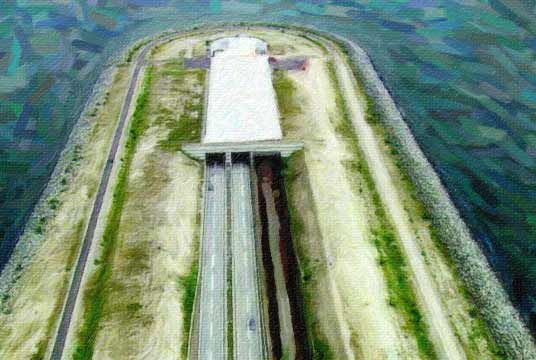 April 1: The Ohio Department of Transportation (ODOT) announced this morning that construction of the tunnel connecting South Bass Island with the Catawba Peninsula is ahead of schedule and expected to open in time for the upcoming Memorial Day Weekend. Memorial Day historically is the weekend when activities typically heat up on the islands and Marblehead Peninsula.

The Cat Bay Tunnel as it has become known, will include 3 lanes of traffic that travels the 2.85 miles from Catawba to the southwest tip of South Bass Island. ODOT spokesman noted it took five years to build and cost more that $75 million to complete with no loss in human life. Although the tunnel was bored through solid limestone, the tunnel was sealed with 12” of a special concrete mix designed to last more than 150 years. The entire trip will take just five minutes and cost drivers $10 per trip. An annual pass is available for $200 and includes unlimited to and from travel, even when the lake freezes over.

Governor Kasich is slated to cut the ribbon at at 9:30 a.m. on May 27. When asked to comment on this momentous event for the millions of visitors expected use the tunnel in the coming years, the governor quipped, “I hope they’ll still appreciate me come November.”

The Cat Bay Tunnel is expected to increase tourist activity both for Put-in-Bay and the Catawba Peninsula which has in resent years has already seen an increasing amount of residential development. Put-in-Bay has long been an island destination unlike anything else in mainland North America. Regulars to the island compare it with the Florida Keys, but without the heat and hurricanes.

The new connecting tunnel is expected to dramatically effect the 3 ferry lines serving the Marblehead Peninsula and South. Today the trip from Catawba to South Bass Island by ferry takes less than 20 minutes travel time and up to an hour wait time if a passenger just misses the ferry. Most effected by the direct drive tunnel is the Miller Boat Line which services Put-in-Bay and Middle Bass Island.

When asked how this was going to effect their business, a Miller Boat Line spokesman, Wanda Baker said, “Sure, it’s going to hit us in the pocket book. But, we knew this day was coming and I think everyone will be surprised with our new schedule of special event trips that will be an attraction in their own right. I think everyone will love our moonlight drive-in theater trips where a full-length movie will be shown in its entirety, will be shown as the boat circles the islands. It’ll be just like grandpa’s drive-in movie stories. I don’t think anyone else will be offering anything like this.”

In a long tradition of celebrating certain events, the one that most comes to mind is a particular day in April, much like today, when all reason can be suspended and almost anything can be believed. We hope you have a great and enjoyable fools day.