On this day in 1918, a young pilot that many of his flying buddies called the old man because of his age, accomplished a feat that would in the days and years to come earn him national honors. When Eddie first arrived in France the year before, he was assigned as a staff driver for General John Pershing because of his experience designing and racing cars back in the states. But being a chauffeur was not what Eddie had his mind set on.

Even though he was 2 years over the age limit, Eddie was accepted into the Army Air Service (thanks in great part to influential friends, many of whom he met back in Columbus, Ohio where he was born and raised). 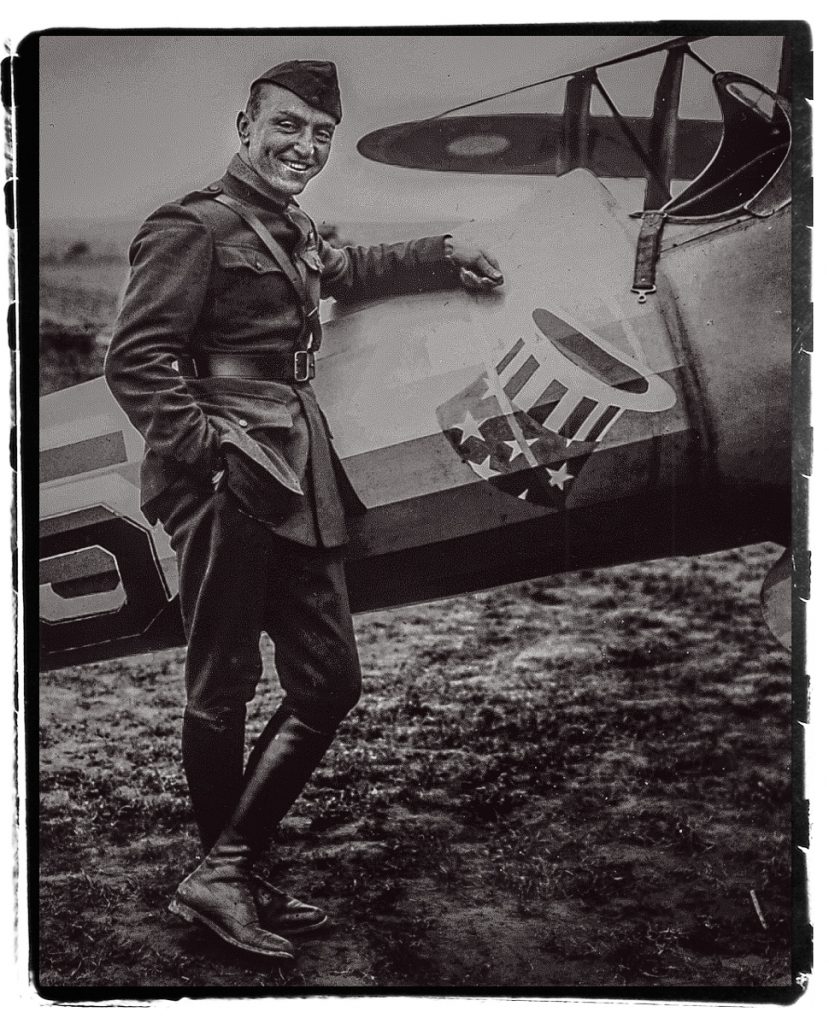 After going through his air training, Eddie was commissioned as a 1st Lieutenant and became chief engineer at the poorly prepared training base in Issodun. After making many improvements at Issodun, he was sent for training in aerial gunnery in Cazeau in the following January. He qualified as a candidate for training to become a combat pilot.

In February, Eddie was sent to Villeneuve-les-Vertus for advanced training and was assigned to the 94th Aero Pursuit Squadron, the first all-American air unit to see combat.
Eddie had his first confirmed victory on April 24, 1918 and in May, became an ace, winning the French Croix de Guerre by shooting down 5 German airplanes. He was named Commander of the 94th on September 24.

The following day, on this day in 1918, Eddie was flying alone not far from Verdun when he spotted a couple of German reconnaissance planes being escorted by five fighters. Eddie slipped in behind the formation and began climbing until his plane wouldn’t go any higher. He then shut down his engine and began a steep dive right towards the enemy planes. When he came in range, he opened fire shooting down one of the fighters. Restarting his engine, he roared back up flying right through the scrambling formation taking aim at one of the reconnaissance planes which went down in flames as well.

Having lost the element of surprise, the overwhelming number of enemy planes began a concerted effort at shooting down Eddie. He would later recall that he “saw tracer bullets go whizzing and streaking past his face.” Eddie then withdrew from the combat and headed back home.

For that feat and his courage Rickenbacker would receive the Medal of Honor and the admiration of many Americans. Just 14 days later “old man” Eddie Rickenbacker would celebrate his 28th birthday. By war’s end, Eddie downed 26 enemy planes and given the title “Ace of Aces.”