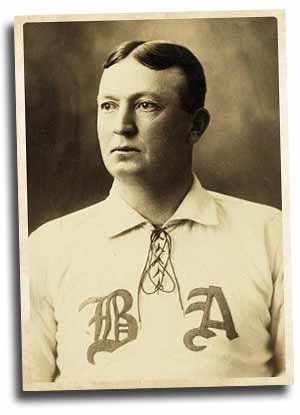 May 5: Baseball is game of statistics. Everything about the game can be recorded and compared. On this day in 1904, Denton True Young would be adding his name to the record books after he pitched his first perfect game in his professional career with no batters reaching first base. On that day he was pitching for the Boston Americans at Huntington Avenue Grounds. The Boston Americans was one of the original American League teams formed in 1901. Eight years later they changed their name to the Boston Red Sox.

Denton Young was born in the really small community of Gilmore in northeast Ohio just 2 years after the end of the Civil War. Working on his father’s farm, Dent Young as he was called, only completed his 6th grade of education before circumstances forced him to work full-time on the farm. In 1888, he began playing semi-pro baseball as a 2nd baseman and sometime pitcher. Three years later he began playing professional ball in Canton then moved up to the majors a few years later playing for the Cleveland Spiders. By then he had gotten the nickname Cyrus, which was at that time a dig at his rural upbringing. When on the mound, his opponents knew him as a hard-throwing pitcher.

Denton Young would become the only pitcher in the first hundred years of baseball to win 500 games, 3 of which were no-hit shutouts and his teammates no longer referred to him as “Cyrus” they just called him Cy. Cy Young retired from playing baseball in 1909 after playing his 906th game.

Cy Young died in 1955 at Newcomers Town, about 10 miles west of Gilmore. A few years later an award was created by the baseball commissioner to honor the best pitcher in each of the two leagues. That award is named the Cy Young Award.