On this day in 1914 the American Traffic Signal Company installed the first electrically control traffic signal system on the corner of East 105th Street and Euclid Avenue in Cleveland Ohio. This was the beginning of a series of inventions used to help motorists, pedestrians, bicyclists and carriages to safely navigate through an intersection. Prior to this a police officer would stand in the middle of a busy intersection and hold up either a stop or go sign. 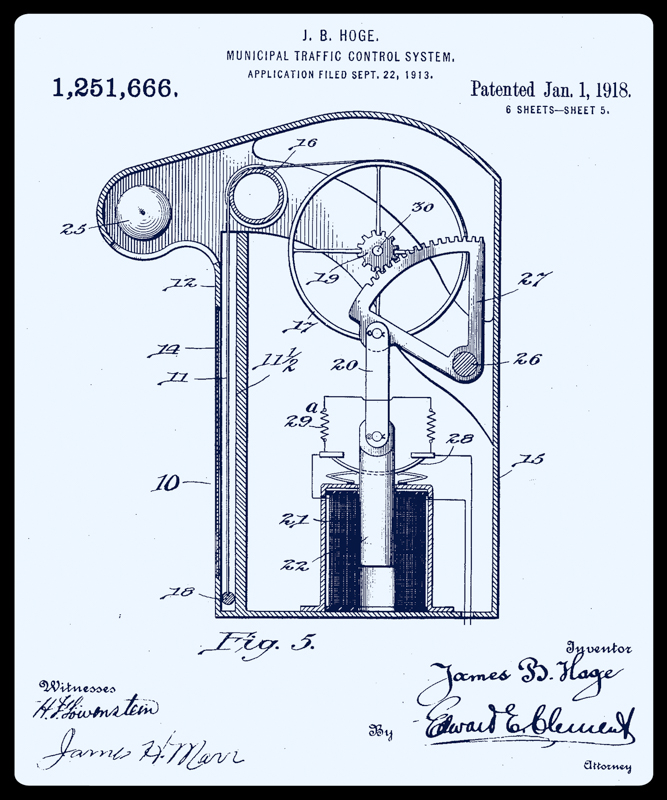 James B. Hoge’s design still included a traffic policeman, but instead of standing in the middle of the intersection he had a little enclosure similar to what people of a certain age remember as a phone booth. From this little booth, the police officer could detect backups and alter the traffic flow. He also had a connection with the local fire departments and could activate a steam whistle to alert pedestrians and vehicles that an emergency vehicle could be coming through the intersection at any moment.

Hoge’s traffic signal didn’t have the red / green lights we know, but instead lighted signs that said either MOVE or STOP. The entire system was extremely complicated and did not catch on. Variations of traffic controls were beginning to be seen across the country. In 1922 another Cleveland resident, Garrett Morgan Sr. applied for a patent that was a manually controlled signal that had lighted semaphores as well as a colored light in the center that was red for stop and green for go. Morgan’s idea was not widely implemented, but, Garrett actually sold his patent to a new start-up company named General Electric for the price of $40,000– not bad when the average income in 1922 was just over $3,000 per year. General Electric would go on to mass produce traffic lights for the entire country that would incorporate Mr. Morgan’s color lights housed in a 4-sided box.

Speaking of traffic lights, inside Ohio’s Small Town Museum in Ashville, the oldest continuously operating traffic light that has been in operation since 1932, but it was retired from service in 1982 when, due to its configuration of only one light that changed colors, color blind folks couldn’t distinguish between the red and green light changes.